skip to main | skip to sidebar

Now that it is almost Fall, I can't wait for the sweaters and jackets and boots. Of course with my small income and being a college student, a girl will just have to dream for now.
Posted by kaelyn at 8:55 PM No comments:

So, top 10 favorite songs of right now would be:
(1) Possibility- Lykke Li
(2) No one Does it Like You- Department of Eagles
(3) All of them All- Liz Durrett
(4) Two Weeks- Grizzly Bear
(5) Wolves- Phosphorescent
(6) White Winter Hymnal- Fleet Foxes
(7) Nantes- Beirut
(8) The Trapeze Swinger- Iron & Wine
(9) November Blue- The Avett Brothers
(10) Southern Point- Grizzly Bear
Today I got a dress for my cousins wedding. It was 70% off at J.Crew (got to love those employee special discounts). It's lavender and one-shouldered, very simple yet pretty. 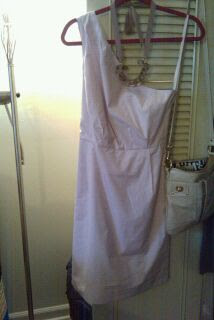 This picture doesn't do the dress much justice but it does need a bit sprucing up. I'll probably belt it and some jewelry will spruce it up too. I got the necklace from J.Crew too to go with it.
Anyways, I completely made out with only spending $51 on the total ensemble. I love a good deal.
Posted by kaelyn at 1:11 PM No comments: 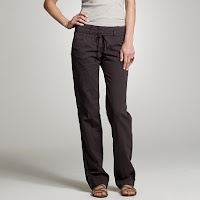 All of these lovely clothes are from Anthropologie and J.Crew.
I am loving oranges, navy, greys, olives, and creams this spring.
I wish I actually had some moneys to do some spring time shopping, but I guess a girl can dream for the time being.
I also can't wait to start mixing fancy with casual. I love the idea of lace tops paired with military style jackets or sequins tops and blazers paired with ripped jean shorts.
Oh, I can't wait for warmer weather to start experimenting.

So I was doing my daily browsing on Women's Wear Daily, catching up on the latest and greatest news, and I came across the Valentino and Stella McCartney Spring Ready To Wear lines. Needless to say its instant love. Here are a few highlights: 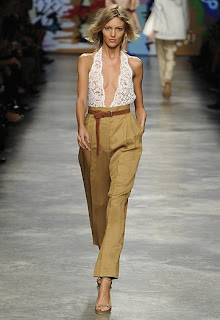 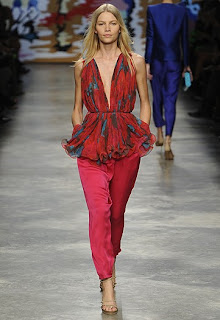 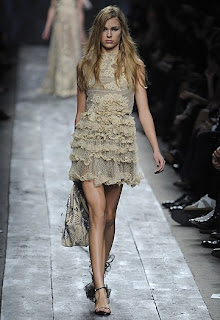 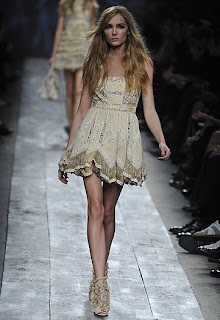 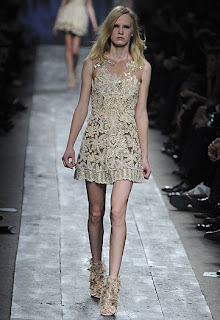 I wish I could afford these fabulous clothes. I love the lace, ruffles, and beading of the Valentino line and I love the structure and clean cuts of Stella McCartney's line.

Posted by kaelyn at 8:34 AM No comments:

And so fall begins..

So this weekend was kind of uneventful.
Friday I had class till 11 then work at 12-8. Needless to say I was exhausted by the end of the day.
Me and Teej just ate some pizza ( from the BEST place ever) and then I watched Gone Baby, Gone  with my roommate Megan. It was a weird movie and slightly depressing.
Saturday, was Homecoming and I had to help out with FAME (Fashion Apparel Merchandising Experience). I basically just sat there at the table hoping
someone would come buy something or donate money. But around 2 I called it quits and went back to the apartment to nap.
Saturday wasn't a complete waste though. Me, Erin, and Hilary made halloween cookies and decorated them. The picture quality is shitty since it was taken
with my phone so they really didnt turn out as bad as they look: 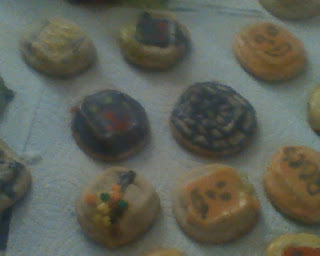 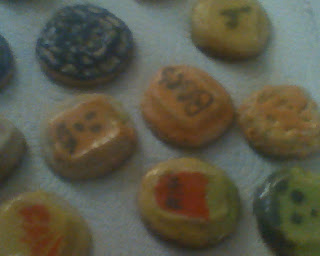 After all the excitement of cookie decorating me and Tj watched Away We Go but failed to get through all of it since I fell asleep. But since we have it for 24 hours maybe Ill watch the rest later.
Today, me and tj went and did a little shopping. I needed a few nice things to wear to work at JCrew so I ended getting 2 blazers and 2 sweaters, appropriate for work. Lately, my new thing is blazers with jeans and a tee underneath, and wide-leg trouser jeans. I've recently become obsessed with hunting stuff out with that criteria. I do have my phases thats for sure.
Afterwards, I sat on the computer with jenna ichatting while she shifted through my crazy messy closet to pull out sweaters and boots for my mom to send to me since its starting to really cool down up here in philly. While Jenna was sticking things in bags I sat here relentlessly trying to get Skylar to look at me and then i got the idea to take pictures. Of course half the time he ignored me like usual but i still his furry grumpy butt. 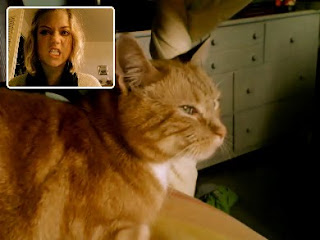 Anyways, I need to go be productive. I got class and work tomorrow and times a wastingg. Until next time..
Posted by kaelyn at 2:14 PM No comments:

So, today I took Tj to go to the Mac store so he could get is computer fixed.
While we were waiting on the computer we walked around the shopping center and I decided I wanted to go into J.Crew.
As we are leaving I decided to go out on a whim and apply for a job there. Little did I know that I was going to have to fill it out there and turn it in right away. But I am soooo glad I did because otherwise I think I would have chickened out. The guy seemed pretty excited that I was majoring in FM and was asking me if I liked visual merchandising and stuff. I have an interview on Thursday at 12, so I am really excited/nervous. I reallyyy hope I get the job because it's somewhere that I'm interested in working at after school so hopefully I get some more learning experience and such. PLUS a discount :)
Anyways, I am so excited about the news that I can't stop thinking about what I'm going to wear to the interview, or what I'm going to say. I'll let you know how it goes after Thursday! WISH ME LUCK!!
Posted by kaelyn at 6:10 PM No comments:

Here are some pictures we have from the race from Tj's phone; ill put the rest up later: 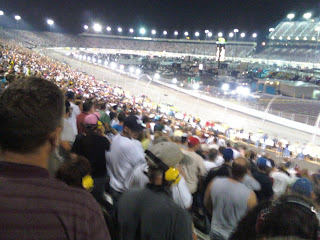 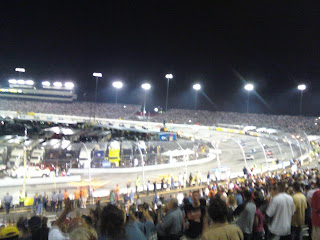 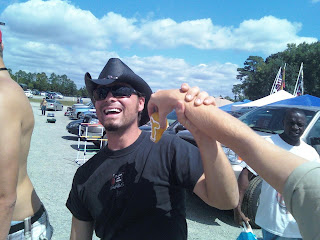 So this weekend was crazy to say the least.
Friday, me and T drove home after class. It was our first long road trip together. We did pretty good for the most part. Only minor bickering about speed limits and such but thats not normal if your me and are a complete passenger seat driver. We actually did really well when you factoring that in.
Anyways, I was only home for a short time so I got to have dinner with my mom and Jenna and Tj's parents. And after I stopped by and got to hangout with Ashley for a little. I would have liked to be home for longer but I just didn't have time. We had the Richmond race on saturday with Tj, his cousin, and his cousin's 2 friends. I definitely had to learn to hang with the guys, being the only girl.
But, Saturday we were up at 5:00 am to get ready to leave for the race (and yes I mean Nascar race). We got there at around 8am in Richmond and the place was already pretty busy. All the rednecks had their tents up, their racing gear on, and cooking breakfast on their mini grills. We had these two old guys set up next to us and I swear they were trying to get me drunk. Right after we set up they were handing me jello shooters and the rest of the day they were making me margaritas. But for the most part we hungout, tailgated, and played games all day. Like blongball and LCR.
But I had the most fun just people watching. There were so many funny drunk people tailgating and during the race. People just did not pace themselves thats for sure. There was this one guy who just passed out under someone's van. Like his upper half was under the van and the rest of him wasn't. How he got in that position is beyond me.
The race didn't start till about 8pm. But actually being at the race is so crazy. It is loud as hell and really no matter where your sitting, you seem pretty close to the track. There weren't as many crashes as I would have liked and after a couple hours of watching the cars move in a circle you start to just zone out and go into a daze, well at least I did.
But the race ended up ending at around 12 and we ended up sleeping in our cars, definitely not
the most comfortable situation but I survived. The next morning we got up to head back to philly and made pretty good timing.
Thankfully I don't have school tomorrow (Tuesday) due to my school's "Day of Service" so I have that time to finish recovering from this weekend. But I have to say that I don't think it will be my last race. All in all I had a successful fun weekend.
This is from 2 weekends ago; me and Tj made delicious cinnamon wheat pancakes with a side of bananas and blueberries.YUMM 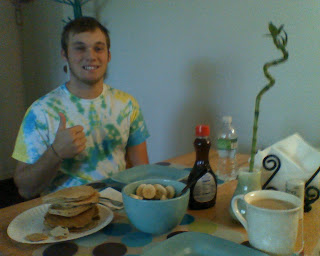 Posted by kaelyn at 5:27 PM No comments:

kaelyn
What's there to say? all things fashion, a cup of tea, true blood, reading, good music, my boy and family. These are a few of my favorite things.